I made it back from Brazil on the 20th of December… still recovering from the travels, but this was a hugely significant trip. I think we all knew it would be, but I find it was very cathartic for me…

The first part of the trip was busy with speaking and traveling…plane flights and six hour bus rides. 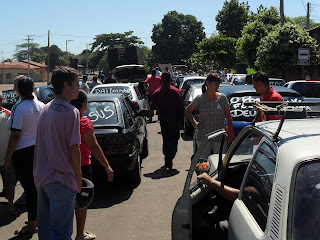 It was a great honor  … it always is… to speak at some of these events… a citywide rally for “The Day of the Bible,” That morning they had over 200 cars in a parade through town.

The dedication of a monument at the entrance to the city of Algodao de Jandaira. I was so glad to have the book, “When God Transforms the Desert” to be able to present to them. That was one of the reasons for the trip. As soon as I heard they were doing this, it was on my calendar and the book process (with a few interruptions) was finally completed. 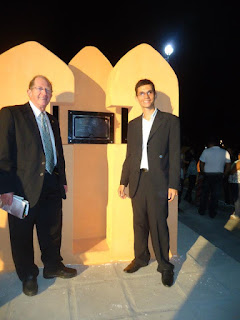 But the other main reason for my trip was to visit the sites on the prayer mountains where Marilou and I were in July of 2010. What God did in her life in those days, I would only discover when she was in the depths of her last days on this earth, and she would tell me how much she wanted more of His presence. I knew that trip had been of eternal significance. So returning was vital. We had agreed on it before she passed away.

The first stop was in Belo Horizonte. Pastor Ronaldo Cota and his wife Elaine picked me up from the airport and we went directly there… to the prayer mountain. It could not have been more perfect. The picture I brought was of Marilou and I there at sunset after spending most of the day. Now, a year and a  half later, we arrived in late afternoon, moving toward sunset. The hill itself is a lot of bare rock and dirt, and not many places to bury the picture, but at the edge of some grass I found a spot. I dug with a rock, buried the picture and covered it with ashes, and sobbed… the memories flooding my mind of our time there together with Him. Now to make her a permanent part of that place of 24/7 prayer was profound. 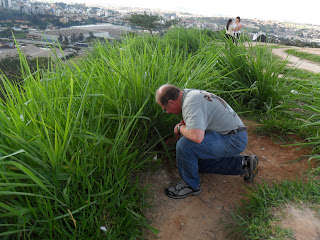 As I packed the soil down, the clouds overhead and rain in the distance. I asked the Lord if He might send the rain to settle the ground. As we headed down the mountain, the lightning flashed and the thunder rolled and it began to rain. I sent  up a short, “Thank you, Father,” and we headed to their home in Sabara where we had stayed. I gave them a magnet Esther had made and a copy of the memorial service bulletin.

The next day we drove up to the mountain there in Sabara. This is where we had pitched the tent, and I had a picture of her sitting in the door of the tent singing to the Lord. I dug a hole about where the tent was, and added a small purple flower I had picked on the way up. Again, the tears flowed as I thought back to those days we spent there, and her diary entry about the birds and her desire to fly free. 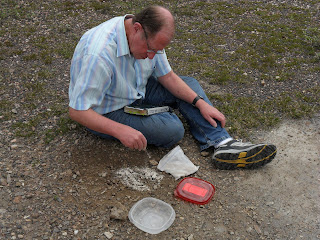 Elaine remembered that Marilou told her that she like butterflies. And as the Lord knows all these things… as we were getting ready to leave…. a lone butterfly flittered right in front of me as if to make sure I saw it. And the birds that had been absent the whole time we were there, now appeared and glided on the updrafts coming up the sides of the hill. Another little personal touch from a loving Heavenly Father. Thank you, Lord.

That same afternoon I caught a flight to Joao Pessoa, a three and a half hour plane ride North East of Belo Horizonte. My good friends there, Marcio and Claudia Chaves and their daughter Carol accompanied me to the beach where Marilou and I stayed that July in 2010. It was the place where I took a picture of our feet together in the surf and then got bowled over by a wave and my phone got drowned… Marilou was screaming… it was quite a funny experience. Now, I took a picture of just my feet there. I dug a hole in the wet sand, and as I mixed the ashes in the hole, 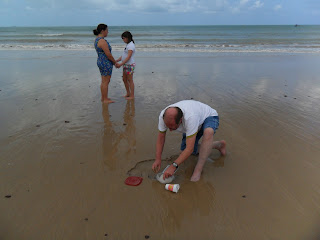 Claudia and Carol prayed for me in the distance. I later went back to look at that place, and the surf had washed her picture out to sea… so fitting since she loved the ocean… now that laminated picture is floating somewhere off the coast of Brazil. 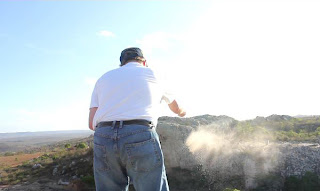 It was such a joy to be able to present to them the copy of my book, “When God Transforms the Desert.” It was after all, their story, and the memorial at the entrance to town is now there to give testimony to the fact. And there, in those days I had a very strong inner conviction that a page had been turned. A new chapter was now beginning in my life. It is not that I do not still weep and miss her. I cried just this morning and told her that I missed her. It is that now, this is a new chapter, a new adventure. Sunday night after preaching twice in the First Baptist Church of Valentina, I lay on the bed in Marcio and Claudia’s home. As I closed my eyes, a very clear picture appeared. Not like a photo, but like a line drawing in blue pencil. It was of a motorcycle and side car. An adult male with a helmet on was sitting on the motorcycle, and a young boy, also with his helmet on, was sitting in the side car. Both had big grins on their faces as if they were really enjoying the ride. I knew immediately this was a picture for me of my “Daddy” and me as we set out on this new adventure together. Since then, whenever something new or challenging comes along, I see that little boy grinning from ear to ear, and I know whatever comes my way, it’s part of my “Daddy’s” adventure He has for me.

Turning a page can be such a simple thing, but it can take you from one chapter to the next, and as you begin the new chapter, you wonder what you will find as you move ahead. What will be part of my new adventure? I have not a clue, but I know my “Daddy” is driving, so I can enjoy the ride… Turning a page, can be quite an adventure itself.